I don’t think anyone saw how the first few weeks of NBA basketball would turn out, there’s been twists, turns, jumps, falls and leaps, the beginning of this season has been completely overwhelming, underwhelming and a massive headache in general. Let’s just do a mutual agreement with the audience that the Eastern Conference is putrid, since the fall of the Bulls dynasty in 98, the league has been dominated by the Western Conference completely. I mean the Boston Celtics standing at the fourth seed? A team who relies upon Jeff Green and Jordan Crawford as their fourth quarter closers? The Charlotte Bobcats at the 6th seed? (Read that again), MY Chicago Bulls at the 8th spot and without their leader Derrick Rose? Seriously the only time I was engaged at during the New York games was when I was trying to figure out why Kenyon Martin looked like an exact replica of Carmelo Anthony, from the tattoos, the white headband and the ever expanding waist line. I’ll end this paragraph by saying only three teams in the east have records above 500. Proceed to light yourself on fire.

The Western Conference has also thrown a few surprises our way, I mean Monta Ellis actually looking for his team mates? Good God almighty, Arron Afflalo being arguably a top 5 shooting guard, behind James Harden (1), Klay “Cash Money” Thompson (2), Dwyane Wade (3), Monta Ellis (4 and can I say once again, Good God almighty) with Afflalo checking in at 5… God this generation of Shooting Guards are horrendous. I mean if I told you a few weeks ago that Portland would be currently sitting on 818. with Phoenix sitting at the 8th seed in front of the Grizzlies, Warriors and Timberwolves, you would of spear tackled me off a cliff, smiling you had done the basketball world a favour. Throw in Derrick Rose’ injury A-FUCKING-GAIN and Kobe Bryant’s near quad triple double, 9 points, 8 rebounds, 8 turn overs whilst averaging 28 minutes a game. (Sorry, couldn’t resist) and then Toronto Raptors sending Rudy “Journeyman” Gay to the Kings in an attempt to wipe their salary clean for the 2014 draft. This has been such a hectic start to the basketball season, the strangeness of everything still hasn’t fully hit me, I mean Portland and Spurs ripping off a 10+ win streak within the first few weeks? Boogie Cousins quickly taking Blake Griffin’s spot of “Most-Hated-Loved-Star” I just need to throw out an article.

“Carmelo Anthony recruiting Rajon Rondo.”
I definitely see this rumour as something that actually happened, let’s set the table… 1) New York Knicks have had one of the best depressing starts in their history, I’m surprised James Dolan hasn’t been publicly assassinated. 2) Carmelo Anthony is pissed off with the brand of basketball the Knicks have been playing, JR Smith looks like a rookie, his 2013 statistics of 18.1 points off 42.2%/5.3 rebounds/ 2.7 assist has been replaced with 11.2 points off 34.8%/ 4.7 rebounds/ 1.9 assist… KEEP BALLING EARL SMITH III. Tyson Chandler is out and Raymond Felton is 5 months away from appearing on The Biggest Loser. I can totally see Anthony reaching out to another star (I think Rondo lost the title of Superstar personally) to re-energise the Knick’s franchise. 3) Knicks need to keep Carmelo happy, because he’s a free agent at the end of this season and apart from the flashing lights and red carpet why would he want to stay such a disfunctional team. 3) Knicks are loaded and the organisation thinks the more money they spend the better they’ll be. 4) Celtics are in  rebuilding mode. 5) How do you expect Rajon Rondo to be effective in the Celtics? He’s a player that doesn’t look for his own shot, he’s reluctant close a game or draw to the paint because of his free throw shooting and his jumpshot is still suspect. Throw in the fact Jeff Green with Bradley/Crawford might be his best passing options and… Well… Yeah.

How would this dynamic work? Not good, or at the very least not good enough to secure New York anything in the Eastern Conference as long as LeBron James keeps playing like a 4 time MVP, 2 time Finals MVP, top 10 greatest player of all time does and the Pacers become a legitimate threat to take the title. Here’s a little excerpt from an article I did on Carmelo Anthony and what pieces he needs to win a ring.

“What pieces does one need to put around Carmelo Anthony so he can win his first ring? For me the obvious lack of defence stands out more than an 50 Cent in Goodluck Yum Cha Eastwood. You would definitely need to throw in a defensive guard that can hold his own on the offensive side (No that’s not Shumpert.) You need an elite athletic big man that can cover up Anthony’s defensive holes, and someone who can get you easy shots close to the hoop when Anthony is cold, (basically Noah/Hibbert.) Another thing that stands out for me apart from Anthony’s fantastic offensive game is his isolation based offense, he’s like a 6’8 Allen Iverson with a beer belly and a better jumpshot. Also unlike Paul George, Anthony can’t play without the ball, whilst George’s hustle and defensive impact can’t be recorded upon a stat sheet.

It’s hard to build around an all offensive/no defensive Small Forward, examples in history include the Iceman, King, English and the Human Highlight Reel. (Gervin, Bernard King, Alex English and Dominique respectively.) All of them focused purely on offensive and all of them failed to win a ring. Julius Erving was one of the few examples that escaped this fate, though he needed a top 15 player of all time to help him accomplish it with Moses Malone. So basically the blueprint to win a ring includes…
Carmelo Anthony to be hotter than lava.
An elite rebounding big man that plays excellent defense and can work without the ball. (Dwight Howard 2009)
An good defensive guard that can score mildly efficiently, thus allowing the coach to hide Carmelo on the weakest offensive threat. (Jerry Sloan 1971)
Shooters that can spot up and spread the floor allowing Anthony to play street ball (Kenny Smith 1994, Steve Kerr 1994)

In summary, building around Anthony requires a strong defensive minded team, a team that will allow him to take the ball and isolate for 15 seconds on each possession along with an elite big man and players who can spread the floor. In today’s CBA environment, is that possible? Yes.. Is it fucking hard? Dam straight. Sorry New York fans, I just don’t think Anthony can ever win a ring especially with LeBron James’ game covering everything and Kevin Durant’s efficiency through the roof.”

See the Rajon Rondo trade doesn’t really fix any of this, Rondo’s a good defender, he’s not an elite defender and tasked with running an offense how many energy can he put into defence? Seriously. Throw in the fact that Rajon Rondo can not shoot, he’s hesitant to pull the trigger and would often rather throw a pass that forces a team mate to take a less second shot then take a sort of contested jumper. Doesn’t that mean Rajon’s defenders can drift slowly towards Carmelo Anthony? Absolutely! Does that ruin Carmelo Anthony’s less post game? Yes to an extent! Can Carmelo Anthony pass out of the post like LeBron James or O’Neal? Hell to the no! Of course I would rather have Rajon Rondo over Raymond Felton any given day, because I think Felton’s honestly forgotten what hedging a screen means or what the term defense means in general. But what’s the point, you still have to pay Stoudamire $20 million next year, you have an aging Chandler who looks like he’s going to miss 15-20 games every season from now until retirement and JR Smith is the spark plug for instant offense? What’s the point? You’re going to beat the Heat and Pacers 7 times out of 100 games if the Knicks get lucky. 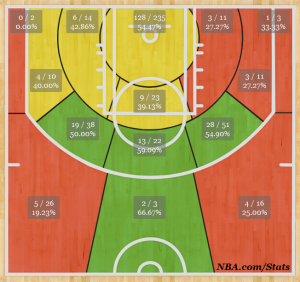 “Rondo is very limited offensively, feeling comfort taking shots only in the paint, his outside shooting shown in these two photos are clearly suspect.”